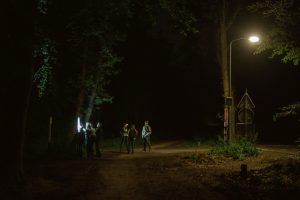 Far from the land of helicopter parenting, getting ‘dropped’ in the forest is a beloved scouting tradition.

Shortly after 10 p.m. on a recent night, a car came to a stop at the edge of the woods. The door opened to release three children: towheaded boys of 12 and 15, and a 12-year-old girl with dark pigtails and an emoji-covered backpack. Then the driver threw the car into gear and sped away, gravel crunching under its tires.

They were tiny figures at the foot of the forest, miles from the summer camp they were attending, with only a primitive GPS to indicate the right direction. Darkness was falling. And they were alone.

They peered into the night: Was this the path?

And then, because there was nothing else to do, they plunged into the woods.

This is the Dutch scouting tradition known as a “dropping,” in which groups of children, generally pre-teenagers, are deposited in a forest and expected to find their way back to base. It is meant to be challenging, and they often stagger in at 2 or 3 in the morning.

Read the rest of the story here:
https://www.nytimes.com/2019/07/21/world/europe/netherlands-dropping-children.html