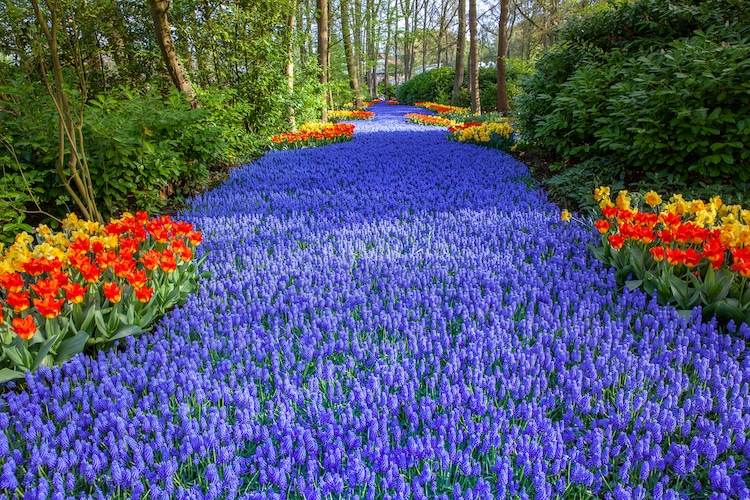 Each year when spring arrives, one of the world’s largest flower gardens opens its doors to visitors, allowing millions to soak in its beauty. Stretching over 79 acres, the Keukenhof is a spectacular garden located in South Holland. About 7 million bulbs are planted here each year, showing off the best Dutch flower producers.

Holland’s beloved tulips are well represented with over 800 varieties on display, but there are also hyacinth and narcissus, among other bulbous flowers, all arranged in neat, colorful rivers. Over 100 royal suppliers participate annually, each bringing their best bulbs to be planted. This makes Keukenhof not only a stunning photo opportunity but a site where it’s possible to discover Holland’s incredible flower industry.

While tulips are closely associated with the Netherlands today, they were actually introduced into the country in the 16th century from the Ottoman Empire. Their popularity grew throughout the 17th century, when the Dutch Golden Age took place. During this time of extreme wealth, tulips were so coveted that they were actually traded as currency until the “Tulip Mania” bubble burst.

The Keukenhof’s history also dates back hundreds of years, when the grounds were used to grow fruit and vegetables for Jacqueline of Bavaria‘s kitchen staff. In fact, the word Keukenhof translates to “kitchen garden.” A castle was later added in 1641 and in the mid-19th century, the landscaping was designed to mimic an English garden. The tradition of exhibiting spring flowers began in 1949, when 20 of the country’s leading flower growers decided to use the grounds to show off their wares.

Now, from mid-March to mid-May, visitors come from around the world to admire the colorful blooms at the Keukenhof. As one of the most beautiful gardens in the world, the Keukenhof helps keep the proud tradition of Dutch flowers alive and well.