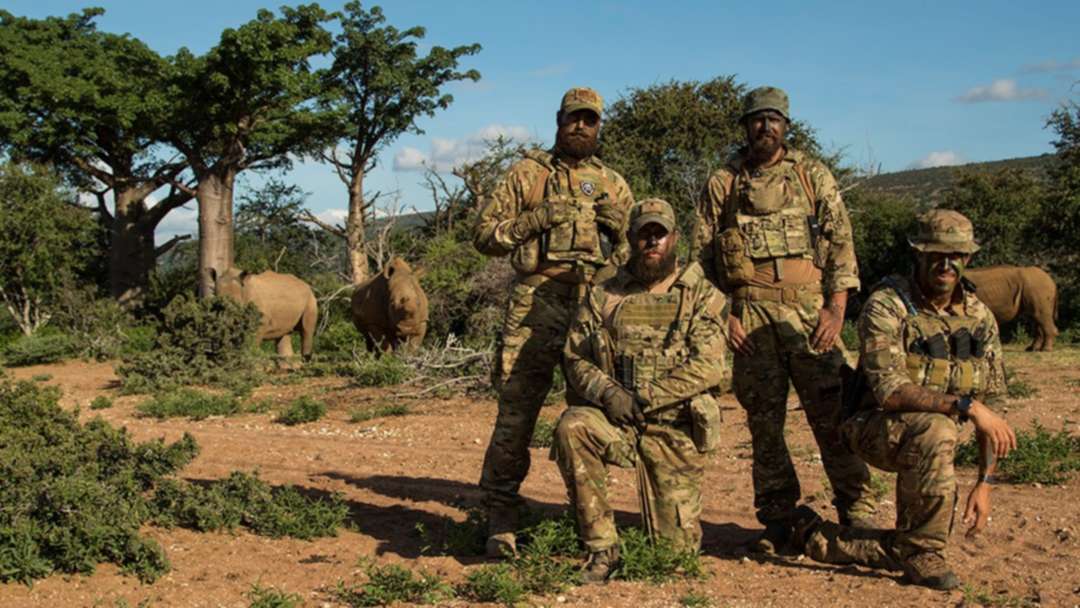 These post 9/11 veterans are tackling the front lines in Africa. Their mission is to help save elephants and rhinos, some of which are critically engendered. They’re part of a group called VETPAW, Veterans Empowered to Protect African Wildlife.

“On the show there were some poachers, and instead of shooting the animal, they got a hold of a shootable tranquilizer. It doesn’t make a loud gunshot noise,” Tate told Grit Daily. “They darted a female rhino. She went to sleep and they hacked her horn off.”

Then the rhino’s predicament got worse. “She woke up and conservationists found her and wanted to help, but she kept running. She was confused. She was scared. The rhino ended up bleeding out and dying,” he said.

The film showed the daily reality in Africa: Horrifying scenes of animals being hunted and cruelly killed for their horns and tusks. It haunted him.

“Seeing the sheer numbers of rhino and elephants kidnapped, tortured and murdered, all these emotions were pouring out of me,” Tate said. “Every day I woke up miserable.”

The images were so powerful, so emotional and provoking, it changed his life. “That’s when I discovered the crisis in Africa and decided to help the voiceless,” Tate said.

He thought his fighting days in the field were over after serving infantry tours in Iraq and Southeast Asia, but Tate came up with a plan to use his military skills to assist the animals.

“My idea was to take veterans to Africa to help fight poaching,” Tate said. “So, it would help vets, create jobs, and help animals.”

Tate was working at the U.S. State Department at the time, handling security for high ranking foreign diplomats.

He started pitching his plan to government officials and got mixed reactions. “Some people laughed at me, some people were irritated, and some were super thrilled,” Tate said.

Tate’s heartfelt pitch wasn’t quite getting off the ground. So he decided he would make it a reality himself. “It was burning inside me,” Tate said.

He quit his job at the State Department and started VETPAW. In 2014 the group received its nonprofit status from the feds.

So Tate traded his civilian clothes back in for cammo and started networking.

“I had met ambassadors to several countries from African nations when I worked at the State Department,” Tate said. “They helped set me up to work with the federal wildlife parks in Tanzania.”

And as soon as the connections were made, Tate was off to Africa. “I flew over with my own money,” he said.