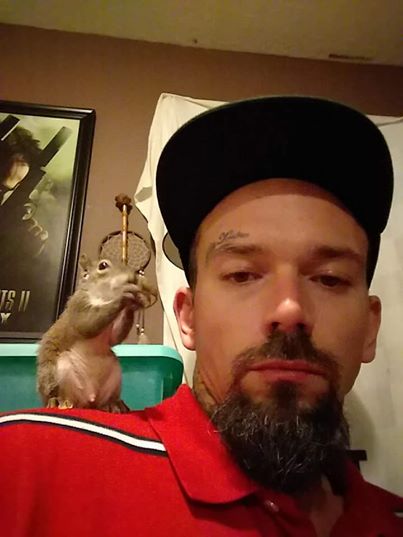 Police called it a meth-fueled attack squirrel. An Alabama fugitive says it’s his beloved pet.
An Alabama man was accused of having a meth-fueled ‘attack squirrel.’ He says that’s a lie.
Mickey Paulk, the wanted Alabama man who police said fed a so-called “attack squirrel” methamphetamine, claims that his pet isn’t on drugs – he’s just mean. (Drea Cornejo/The Washington Post)
By Antonia Noori Farzan June 20
Mickey Paulk has been booked into jail more than two dozen times. He’s on the run from police, who plan to arrest him on drug and weapon possession charges as soon as they catch up to him. But that doesn’t mean that he isn’t a responsible squirrel owner, he says.

“My squirrel is babied beyond anything anyone can imagine,” the 35-year-old fugitive told The Washington Post in a phone call from an undisclosed location early Thursday morning. “It has a very good life.”

Paulk and his unusual pet have been in the spotlight since Monday, when authorities in Limestone County, Ala., accused him of keeping an “attack squirrel” in a cage and feeding it methamphetamine so that it would stay aggressive. The story made national headlines, but Paulk insists that he raised the squirrel as if it were his own child, bottle-feeding it every few hours and keeping it warm with a heating pad when it was first born, and any allegations to the contrary are slander. He doesn’t even like it when people smoke around his pet.

“The squirrel is not on meth,” he insisted. “I honestly think that would actually kill it.”

Paulk and the squirrel, who he named Deeznutz, have had a wild couple of days. According to the Decatur Daily, narcotics officers from the Limestone County Sheriff’s Office were tipped off about the squirrel during a drug investigation, and they showed up with a search warrant on Monday. They seized an unspecified quantity of methamphetamine, drug paraphernalia, ammunition and body armor from the apartment, and confiscated the squirrel. Paulk wasn’t there, but another man who was present was arrested and charged with possession of a controlled substance, possession of drug paraphernalia and loitering in a drug house.

“Welcome to the South, man,” one neighbor told WAAY. “We’ve got squirrels on meth.”

In fact, the Daily reported, it was impossible to confirm the animal’s alleged meth use — officers didn’t find any drugs in his cage, and there was no way to safely test the squirrel for meth. But because it’s illegal to keep a squirrel as a pet in Alabama, they couldn’t just leave him there. Because the creature seemed healthy and wasn’t emaciated, police released him in a wooded area nearby.

Paulk, for his part, claims that he had moved out of the apartment several weeks before because he didn’t want to “continue to live a certain kind of lifestyle,” and his name wasn’t on the lease. The squirrel was going to be the last thing that he moved over to his new place, because his new roommate had a cat who he thought might scare it. He had been going back to his old apartment every day to check on the squirrel and feed him, he told The Post, but the contraband that police found there wasn’t his.

“The charges that are on me are just as bogus as the squirrel doing meth,” he said.