Climate Deniers Are Bullies, and Science Teachers Aren’t Going to Take It Anymore 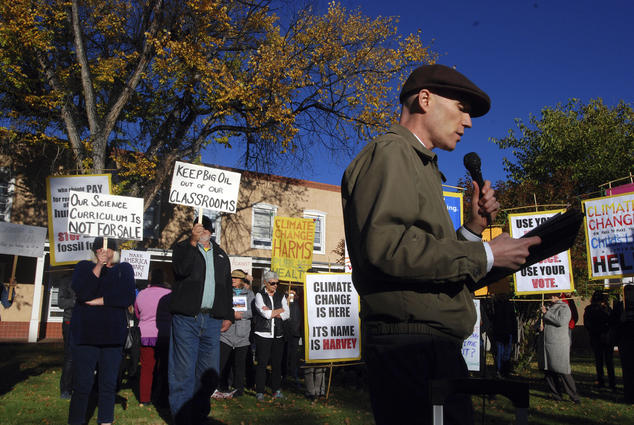 Pressured for years to “teach the controversy,” educators have banded together to expel anti-science forces from their classrooms.

A classic trope of books and movies about schoolyard bullies is the comeuppance moment: that climactic chapter or scene when the bullied hero picks herself up, dusts herself off, and exacts her righteous vengeance. The payback can take different forms—a well-placed punch or a well-worded takedown—but it always results in the exposure of the bully, usually in front of the whole school, as nothing more than a blowhard and a coward. The tormentor is publicly shamed; the former victim is bathed in glory; moral order is restored.

America’s K-12 science teachers are having such a moment right now. For years they have withstood the bullying of an organized climate-denier movement that has successfully strong-armed administrators, parents, and school board officials into agreeing to frame climate change as an open question rather than a scientific fact. Its tactics most recently have included a mendacious mailer received last year by tens of thousands of teachers that falsely identified “a vibrant debate … taking place among scientists on how big the human impact on climate is, and whether or not we should be worried about it.” Just a few months earlier, Idaho lawmakers stripped the state’s proposed science standards of any language suggesting that human activity is causing global warming, with one representative complaining that the standards didn’t relay “both sides of the debate.”

When teachers have retaliated against such meddling, nervous administrators have too often asked them to quiet down and “teach the controversy,” lest they appear to be taking sides in a rancorous scientific debate with obvious political overtones. And when state legislatures get involved—as they have been doing, increasingly—the results can be downright dystopian. States like Texas, Oklahoma, Alabama, and Idaho have recently been pushing a slew of so-called “academic freedom” bills that are worded to sound like reasonable defenses of fair-mindedness and intellectual dissent. In fact, they exist to provide legal and political cover for a well-funded anti-science movement whose future depends on today’s schoolchildren ignoring the scientific method and growing up confused about what is and isn’t true.

Last week the National Science Teachers Association (NSTA) issued a firm position statement directed to its more than 50,000 members. In part it reads: “Given the solid scientific foundation on which climate change science rests. . . any controversies regarding climate change and human-caused contributions to climate change that are based on social, economic, or political arguments—rather than scientific arguments—should not be part of a science curriculum.”