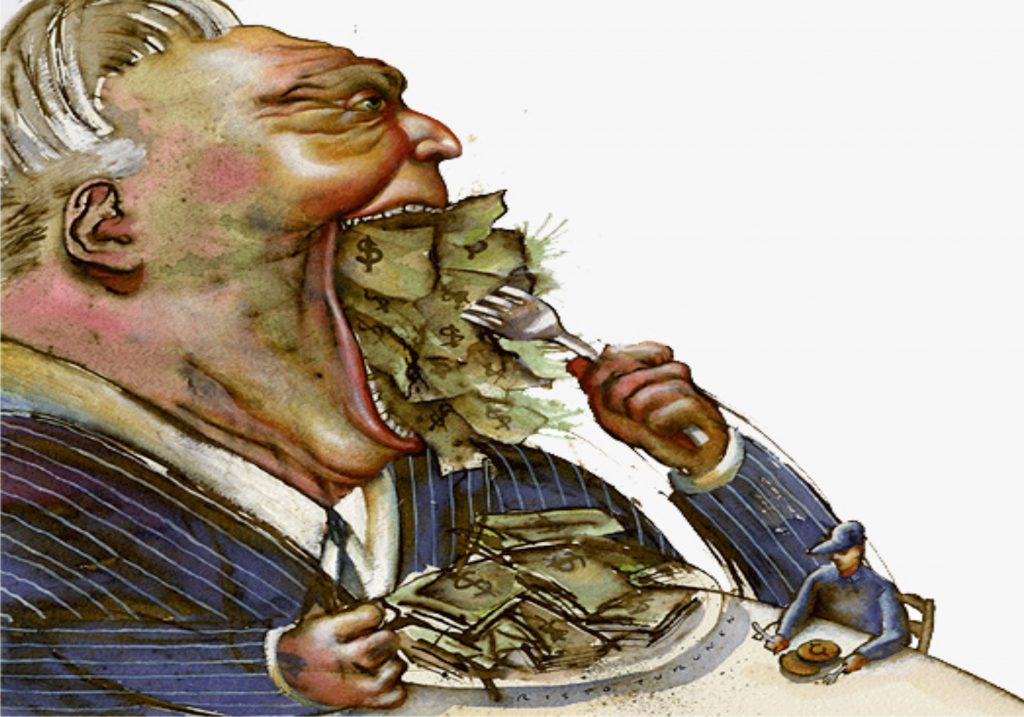 There is no connection between the stock market and reality.

This information was compiled by Dan Price. The original source is here: https://twitter.com/DanPriceSeattle/status/1356348814345564165

1. Airlines spent 96% of free cash flow on stock buybacks for a decade, then cut 90,000 jobs as soon as trouble hits. Then they got a $50 billion bailout
https://www.bloomberg.com/news/articles/2020-03-16/u-s-airlines-spent-96-of-free-cash-flow-on-buybacks-chart

4. Boeing
Spent almost all of its cash on stock buybacks over the prior decade. In the past year, it cut 27,000 employees.
It also fired its CEO over 2 deadly plane crashes and ensuing coverup, and gave him a $81 million exit package
https://www.cnbc.com/2021/01/07/doj-fines-boeing-over-2point5-billion-charges-it-with-fraud-conspiracy-over-737-max-crashes.html

5. On Jan. 6, when the mob stormed the Capitol, the stock market went up 250 points to a new record, handing the richest 1% an extra $300 billion.
Also that day, a new report showed employment dropped for the first time since April and a then-record 3,900 people died of covid.

6. Albertsons, America’s 2nd-largest grocery chain:
*Profit is up 256% in pandemic
*Stock at record high
*Owned by private equity
*CEO made $29M last year
*Fired all California non-union drivers to replace them with gig workers with no benefits/min wage
https://knock-la.com/vons-fires-delivery-drivers-prop-22-e899ee24ffd0?gi=48a63df6821b

7. The stock market for the 500 biggest companies ended the year up 15%, among the biggest gains ever.
Also in that span, those companies lad off a record number of people, and wait times for food banks hit a record high.

8. As part of the first stimulus, the Fed pumped about $3 trillion into the stock market, which helped it soar to record highs. At the same time, a record 30% of small businesses failed and unemployment tripled.

11. Among the biggest 50 companies, they spent 79% of profits on stock buybacks and dividends in recent years to enrich executives and mostly-wealthy shareholders. Last year, those companies combined to lay off over 100,000 workers.
https://www.washingtonpost.com/graphics/2020/business/50-biggest-companies-coronavirus-layoffs/?itid=hp-top-table-main

12. Disney stock is up 21% in the past year to a new record high. In recent months they laid off 32,000 people.
One of our employees lives near Disney World. Recently there was a line of cars outside his house for a drive-thru food bank 7.5 miles away.
https://www.cnbc.com/2020/11/26/disney-increases-layoffs-to-32000-amid-coronavirus-pandemic.html

13. In the pandemic, total stock value has grown by $16.6 trillion.
$8.3 trillion of that went to the richest 1%, and they pay a lower tax rate than those who are unemployed and need help.

14. Salesforce
In the last five years, Salesforce has bought 27 companies for tens of billions of dollars.
It just bought Slack for $27.7 billion.
Its stock is at record high, up 23% in the past year after revenue surged 29%.
And it just laid off 1,000 people.

15. In November alone, the average member of the top 10% gained an average of $200,000 from the stock market while 7 million people plunged into poverty.
https://www.bloomberg.com/news/articles/2020-11-28/decades-of-gains-over-u-s-poverty-at-risk-of-being-wiped-out

16. On one day in November:
*The stock market hit 30,000 for the first time
*Elon Musk became first person to gain $100 billion in a year
*A Census report revealed 6 million people face imminent eviction

17. Uber + Lyft spent $200 million on November election ads to convince Californians they shouldn’t pay drivers minimum wage or benefits.
In the two weeks after it passed, Uber stock went up 39% and Lyft stock soared 52%.
In return, all drivers were denied basic benefits.

21. $3 billion: what Jeff Bezos cashed out in stock in one day, as Amazon profits tripled in the pandemic.
$2.1 billion: cost to give all Amazon warehouse workers 2 weeks paid sick leave and a year of hero pay (they got none of either now)
https://www.bloomberg.com/news/articles/2020-11-04/amazon-ceo-bezos-sells-1-42-billion-of-shares

23. MGM
Laid off 18,000 people while giving its CEO $700,000 in stock. The value of the stock doubled to $1.4 million after the stock went up, partly because of increased profitability due to the layoffs.
https://www.nytimes.com/2020/10/08/business/executive-stock-awards-coronavirus.html

28. Walmart
*Stock is at record high, up 23% in a year
*The Waltons have gotten over $20 billion richer in the pandemic
*Its online sales are up 74%. Its market share has grown
*… it cut hundreds of corporate jobs
https://www.bloomberg.com/news/articles/2020-07-30/walmart-is-said-to-be-eliminating-hundreds-of-corporate-jobs?sref=i3mD6rA5

30. CEOs justify huge pay by saying they’re worth it. But there’s no correlation between profit and CEO pay at 61% of corporations
Since 1990
Stock market: up 300%
CEO pay: up 550%
Take it from a CEO who slashed his pay: it’s about greed, not performance
https://www.economist.com/business/2020/07/11/how-ceo-pay-in-america-got-out-of-whack

31. Stock for the parent company of Ann Taylor, Loft and Lane Bryant is down 75% in a year. It closed all 2,800 stores.
So what did it do? Gave executives $5.5 million in bonuses, including over $2 million to the CEO
https://www.ibtimes.com/ann-taylor-loft-lane-bryant-parent-company-doles-out-bonuses-possible-bankruptcy-2999184

32. Where proceeds from stock buybacks + dividends went over the last 15 years:
White people: $13 trillion
Black people: $0.18 trillion
Hispanic people: $0.21 trillion
When we talk about the systemic racial wealth gap, this is a pretty good place to start.

33. Amid the early days of the pandemic, stocks grew 38%, the most ever in a 50-day span. At the same time, thousands of small businesses were closing each day while thousands of people died from covid each day
https://www.nbcnews.com/business/markets/why-wall-street-soaring-while-main-street-burning-n1223506

34. Google:
*Stock at all-time high
*$6.8B profit last year
*Founders Page + Brin added $10B+ to fortunes in a year
*Offered jobs to over 2,000 people and axed them with no severance before they ever worked a day – after they already left their prior jobs
https://www.nytimes.com/2020/05/29/technology/google-rescinds-job-offers-to-contract-workers.html

36. Chevron
Its CEO made $33.1 million a year. 5 other execs made a total of $59 million.
It spent $13 billion on stock buybacks and dividends in a year then laid off 10-15% of its staff.
https://www.reuters.com/article/us-chevron-layoffs-exclusive-idUSKBN2332P3

37. Big companies don’t just spend profits on manipulating stock. They are a record $10 trillion in debt – mostly for stock buybacks + dividends to enrich themselves. When the bill comes due, layoffs typically ensue.
https://www.washingtonpost.com/business/2020/05/13/with-feds-encouragement-corporations-accelerate-debt-binge-hopes-riding-out-pandemic/

38. In April, a record 30 million people lost their jobs and small businesses lost 55% of their revenue.
At the same time, the stock market rose the most since 1987 and billionaires gained $308 billion.
https://www.washingtonpost.com/business/2020/04/30/stocks-markets-today-coronavirus/

39. Marriott: When the pandemic began, it furloughed most American workers, paid $160M in dividends to shareholders and gave its CEO a 8% raise and 200% bonus.
In the prior two years it made $3.1 billion in profits and spent $5 billion on stock buybacks.
https://www.nytimes.com/2020/04/13/business/business-roundtable-coronavirus.html

40. How big public companies spend their money
*54% on stock buybacks
*37% on dividends
*9% on worker raises, R&D, capital improvements, saving for rainy day … everything else
https://www.washingtonpost.com/outlook/stock-buybacks-gouged-workers-the-measure-stopping-them-comes-too-late/2020/03/27/d6170752-6fcb-11ea-b148-e4ce3fbd85b5_story.html

41. These examples are just the tip of the iceberg – this thread could go on forever. The truth is that the system is rigged for the rich and against regular people, and the stock market plays a vital role in that.
And I’m a millionaire CEO saying that.

If this thread is upsetting and you want to do something small that can make a difference, sign here to show your support for a billionaire wealth tax in washington state. We have to start somewhere, so why not here:
https://www.change.org/p/billionaire-tax-for-washington-state